This page is dedicated to those who are interested in knowing the black history of Dallas, how blacks have progressed throughout the decades…

In the 1960s, Hamilton Park was not the only place for middle-class Blacks to live. Wilson documents the features of these other communities, and he discusses the assets and liabilities of the Hamilton Park setting. He notes that as Hamilton Parks evolved in the 1960s the community began to make additional service demands. For instance, the community had poor bus service and residents had a long way to travel for shopping needs. To validate this contention, Wilson begins to use ethnographic accounts to support his assertions. Interviews with long-term residents pepper the balance of the book; these recollections enhance the text and are one of its principal contributions.

During the late 1950s, residents of Hamilton Park created several community organizations. One of the most prominent was the Interorganizational Council (IOC); this group reflected the dominance of the Black Church in this community setting. A secular group, the Civic League, was also established. Both of these organizations became active in the late 1950s, and they continued their community roles into the 1980s. Of particular importance in Wilson’s mind is the entrance of the IOC into the political arena. Throughout the 1960s and 1970s Hamilton Park residents forged a close alliance with the Democratic Party. The IOC distributed endorsement lists to neighborhood residents, and unabashedly supported those candidates that took Hamilton Park concerns to heart.

In 2010, Dallas news did a summary article about a period of Black history in Dallas centered around highly skilled African American doctors, including surgeons, who broke down some color barriers. Here’s a snippet:

Dallas Morning News readers were probably startled at the June 24, 1954, front-page story that appeared under the headline “Negro MD’s to Practice in St. Paul’s.” The story explained that the more than 300 white doctors at St. Paul’s, a hospital established and operated by a Catholic religious order, the Daughters of Charity of St. Vincent de Paul, had voted unanimously to extend privileges to five black physicians. The doctors were Lee G. Pinkston, William K. Flowers Jr., George L. Shelton Jr., Joseph R. Williams, and Frank H. Jordan.

St. Paul’s administrator Sister Mary Helen and Dr. John L. Goforth, medical chief of staff, gave the doctors a tour of the hospital, to which they could admit 32 black patients.

There was one major restriction: They could practice at St. Paul’s, but they could not become staff. Texas hospitals then required all staff members to belong to the Texas Medical Association, and its constitution had a provision that members had to be white.

“It was amazing,” she said. “Nobody stood in their way. Nobody picketed.”

Dr. Emmett J. Conrad, an African-American surgeon who came to Dallas the next year, later said that “Saint Paul opened its doors before the hospitals in Chicago, New York, San Francisco, and all the so-called bastions of liberty. … You know, it was done quietly, without fanfare. Read more…

The Dallas Negro Chamber of Commerce (DNCC) began as a result of a split over Negro economic progress within the ranks of the Dallas chapter of Booker T. Washinton’s National Negro Business League (NNBL). The split culminated in 1926 with the granting of a state charter. The Chamber was determined to represent more actively the interests of local black people.

The NNBL grew out of Booker T. Washington’s interest in any project which would stimulate Negro enterprise. He envisioned the NNBL as an organization composed of successful black entrepeneurs as a means for exchanging ideas. The national organization’s work would be supplemented by local organizations in four areas. These local NNBL chapters would be concerned with the further employment of blacks, consumer protection, fostering an interest in civic welfare and creating a sense of racial pride. The League held its first formal convention in August of 1900 in Boston with over 400 black businessmen in attendance. Booker T. Washington served as the League’s president until 1915.

via Dallas Negro Chamber of Commerce Register and Researchers’ Guide.

This area of Dallas County was settled by former African American slaves shortly after the conclusion of the American Civil War. Freedman’s Cemetery, a graveyard for African Americans, was established in 1869 on one acre of land purchased by trustee Sam Eakins. Another 3 acres was acquired for cemetery purposes in 1879 by trustees A. Wilhite, Frank Read, A. Boyd, T. Watson, George English, Silas Pitman, and the Rev. A. R. Griggs, a former slave who later became a prominent local church leader and champion of early public education for the African American community…read more here.

Dallas victims among 4,000 documented in new report on history of lynchings in the South

In 1910, a group of men rushed into the Dallas County courthouse, threw a rope around the neck of a black man accused of sexually assaulting a 3-year-old white girl, and threw the other end of the rope out a window. A mob outside yanked the man, Allen Brooks, to the ground and strung him up at a ceremonial arch a few blocks down Main Street.

South of the city, past the Trinity River bottoms, a black man named W.R. Taylor was hanged by a mob in 1889. About 90 miles south is the community of Streetman, where 25-year-old George Gay was hung from a tree and shot hundreds of times in 1922.

And just beyond that is Kirin, where three black men, two of them almost certainly innocent, were accused of killing a white woman, and, under the gaze of hundreds of soda-drinking spectators, were castrated, stabbed, beaten, tied to a plow and set afire in the spring of 1922.

The killing of Brooks is noted in the Old Red Courthouse, now a museum. The sites of the other killings, like those of nearly every lynching in the United States, are not marked.

Bryan Stevenson believes this should change. 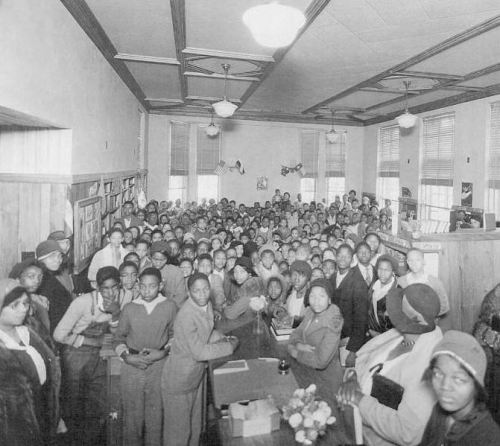 The Paul Laurence Dunbar Branch of the Dallas Public Library was the first library in Dallas to welcome and serve the African-American community. It opened in June of 1931 at the northwest corner of Thomas and Worthington in what was then the predominantly black neighborhood of “North Dallas” (the area now known as Uptown), a thriving business and residential neighborhood which was home to everyone from the city’s black professionals who lived in large, lovely gingerbread-style houses, to middle- and lower-class black families who lived in more modest homes.

Read the rest of this great history at The Dunbar Branch: Dallas’ First Library for the African-American Community, 1931-1959 | Flashback : Dallas.