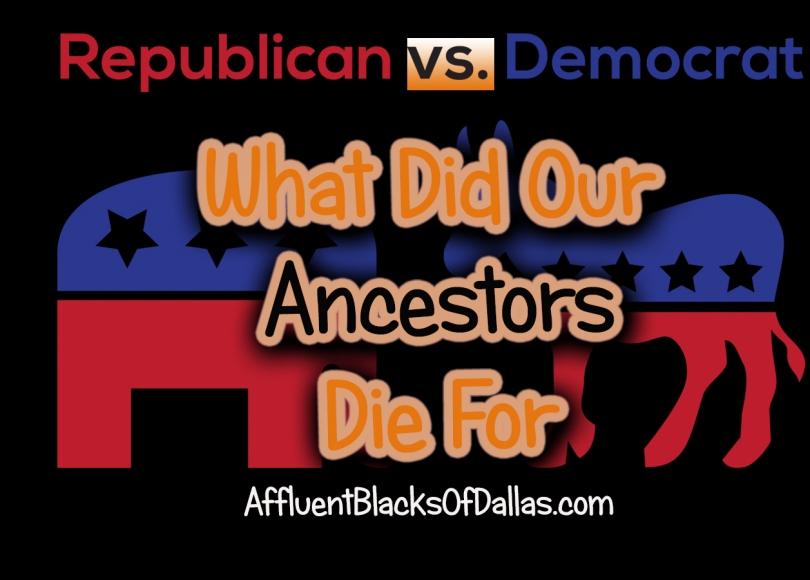 This is a common phrase many brothas and sistas use to convince themselves to only vote for one party as if we’re in one-party communist state like China or North Korea. Why do so many of us blindly believe that our ancestors died for our right to vote? And do we even appreciate the principles that even brought the vote into power in the first place? In our minds, when we say this infamous expression, we vaguely remember seeing black and white images of Black protesters getting hosed with powerful water hoses and dogs unleashed on them. We kinda vaguely remember MLK and Malcolm X, and then we mix in thoughts of lynchings and slaves getting whipped to death; a cloud of thoughts, but nothing concrete.

Not many of us, however, recall any specific instances where Black activists actually lost their lives organizing voting campaigns. Have Black political activists been killed? Yes, but they didn’t get killed so that we vote only one party and lose the power of leverage and negotiating. Malcolm X, way back in the early 1960s, called Blacks who vote only one party blindly “chumps.” This is interesting because according to most polls, brothas and sistas really admire Brother Malcolm, as we call him. But apparently we’re only paying lip service to him cuz we ain’t voting according to his advice. He got assassinated before he could continue to repeat this strategy of putting power behind our vote.

The same is true of Martin Luther King Jr. Right before he was killed in Memphis, most of us didn’t learn in school that MLK said “we’re coming for that check!” which was directed at the US government. His last speech was quite profound and went into details about how to use our political power to ignite economic reforms not just in Black America, but the whole nation. The “bosses” didn’t like that kind of liberating talk as it threatened to take us off the virtual plantation we allowed ourselves to get forced into.

So when I hear people say, “we gotta vote because our ancestors died for it,” I want to ask, “did they die just so that we vote, or did they want us to vote with a specific purpose to truly improve our lives?” Voting without expecting results is worse than not voting at all. At least the person who decides not to vote has a reason. People who vote blindly in the same emotional way over and over again, yet not improving, is absolutely ridiculous. That’s even worse than a citizen in a Communist country voting for the only party available, because at least they can say they had no other choice. In America, we have at least 4 notable choices, but we only vote for one party. That’s the worst voting approach in the history of democracy.

Our ancestors didn’t die for us to become one-party communists. They knew this country is supposed to be a democracy. In a democracy, parties negotiate with leverage. Even your Democratic leaders negotiate with Republicans. For instance, the 1964 Civil Rights Act which helped push almost all of us into the Democratic party, would not have been possible without a deal made with the Republicans (Republican Sen. Everett Dirksen was the main negotiator to help it pass). Many of us didn’t know that. We assume only one party made it happen, and that’s the dangerous fallacy of Black America 1.0 politics. Republican Abraham Lincoln had Democrats in his cabinet. Democrat President FDR had Republicans in his cabinet in the early 1940s. In 1977, the program that we now know as the Food Stamp program was made possible due to negotiations between both parties.

Most of us keep telling ourselves that the reason Obama couldn’t help us was that the “racist Republicans” in Congress kept blocking him. Nonsense. You mean to tell me that Obama never, ever negotiated ANYTHING with Republicans and got something in exchange? Of course he did. Obamacare (the Affordable Care Act, or ACA) was one of the deals he negotiated. Obama had a successful negotiation with Republicans again in 2016 for the “21st Century Cures Act.” I can go on and on. So if he could successfully negotiate a bunch of other deals with Republicans, and even use many executive orders to sidestep Congress, then why not an agenda for Black America? Where there’s a will, there’s a way, but we have to show ALL parties that Black America 2.0 is ready to do business, not as whining, whimpering, blind emotional voters, but as business-savvy negotiators with concrete leverage who know exactly what our ancestors sacrificed for.